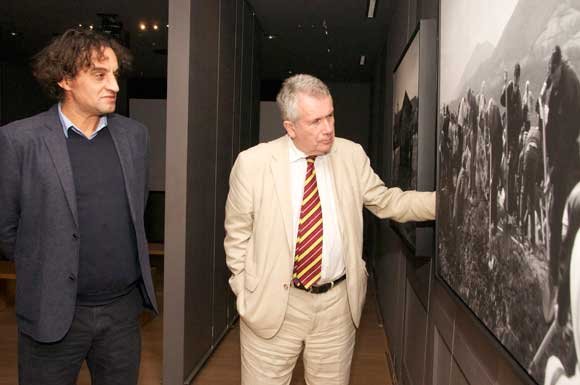 The celebrated BBC war reporter Martin Bell visited Gallery 11/07/95 today, accompanied by representatives of the religious communities from the UK. During the war Bell reported from Bosnia and Herzegovina for the BBC. He says that during his career as a journalist he has reported from 18 different war zones, but the war in Bosnia and Herzegovina left the strongest impact on him. “Photos that I have seen here revived some memories. I know that the civilians in Bosnia and Herzegovina suffered terribly. So that is why I blame not only those who fought the war, but also those who allowed it to happen. By that I mean the democracy of the West, including my own country”, said Bell. Bell visited the Gallery together with a delegation of the “Remembering Srebrenica” foundation.

Through the “Lessons from Srebrenica” program, they are trying to raise awareness about the genocide. Along with Mr. Bell, today’s delegation also included founder and director of the Interreligious Foundation “Joseph” Mehri Nikham, secretary for inter-religious relations of the Church of England Dr. Toby Howarth, Greg Pope, representative of the Catholic Church of Great Britain, and others.